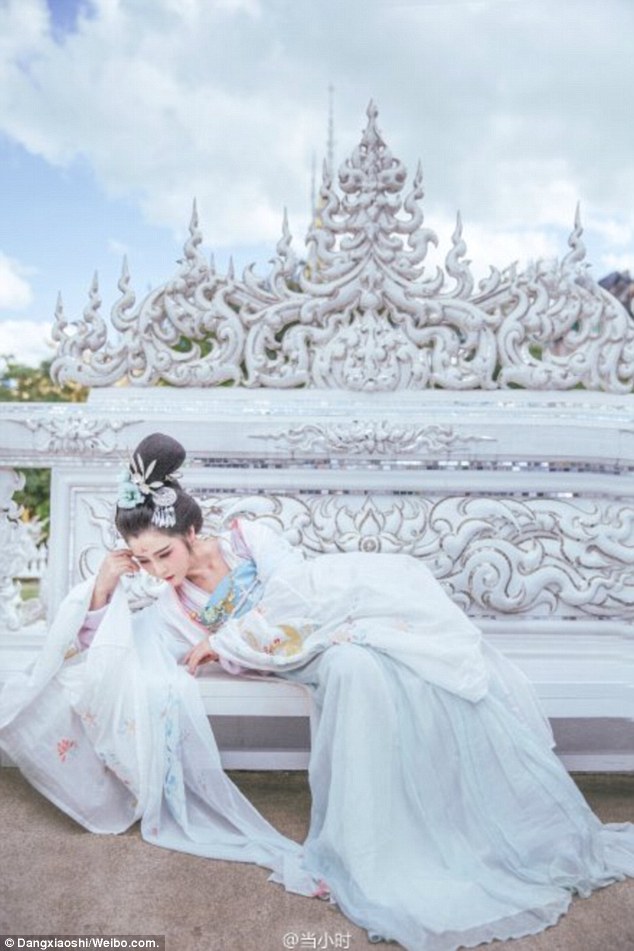 A Chinese model is in the spotlight after posing for a photo at a famous Thai temple.

In the photo, the woman, who remains unidentified, leans sideways on a bench at Wat Rong Khun temple in northern Thailand.

Although the photo received high praise on Chinese and Thai social media, the owner of the temple artist deemed it disrespectful and called it “so ugly” at a press conference, reported the People’s Daily Online. 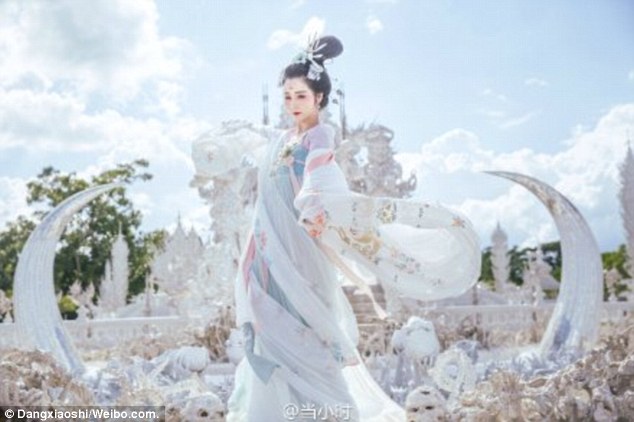 However, only the one showing the reclining model angered the owner of the temple and not the one above. 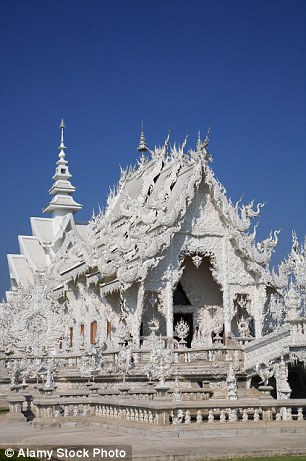 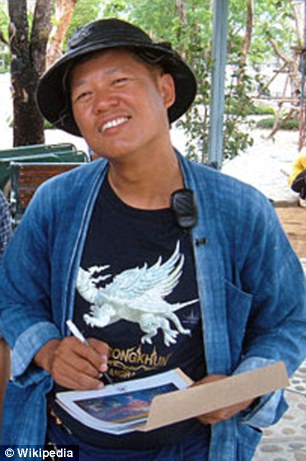 The photo is one of several promotional photos taken at Wat Rong Khun, also known as the White Temple, in Chiang Rai.

The incident began when a Chinese social media user, known by her pseudonym Dang Xiaoshi, posted the series of photos on Weibo, the Chinese equivalent of Twitter, on September 9.

They became an instant hit in China as well as Thailand.

However, Chalermchai Kositpipat, the Thai artist who designed and rebuilt the temple, is less impressed with them.

The 60-year-old called a press conference on September 14 in which he called the photo in question “ugly” and said the model’s pose was “provocative.”

According to Coconuts Bangkok, Mr. Kositpipat said at the press conference: â€œThere was a picture where she looks like the mother of a white snake! Crawling everywhere!

He then demonstrated to the press how to pose correctly for a photo in his temple, according to the same report.

One of them sees him raise his right arm while looking away, and the other sees him turn on his side and stretch out both arms. 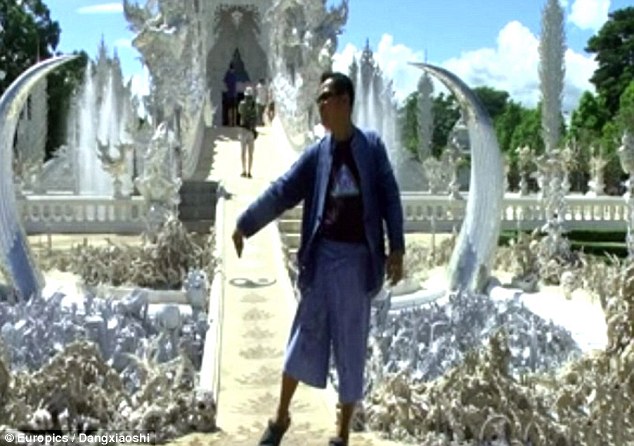 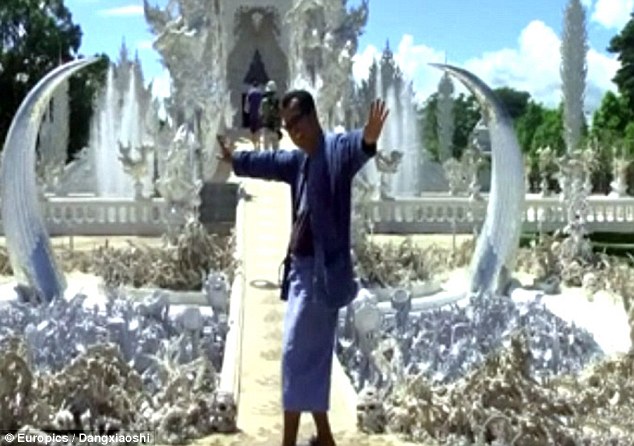 The other suitable pose is with the arms extended, as shown by Mr. Kositpipat in the photo above. 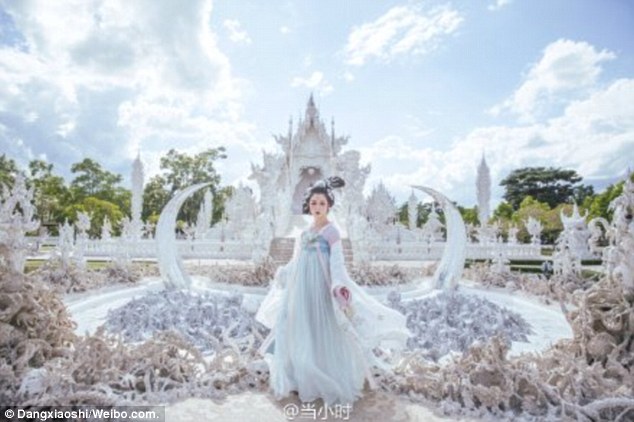 The photography project took Dang Xiao Shi across the world, including Japan and Nepal before Thailand. 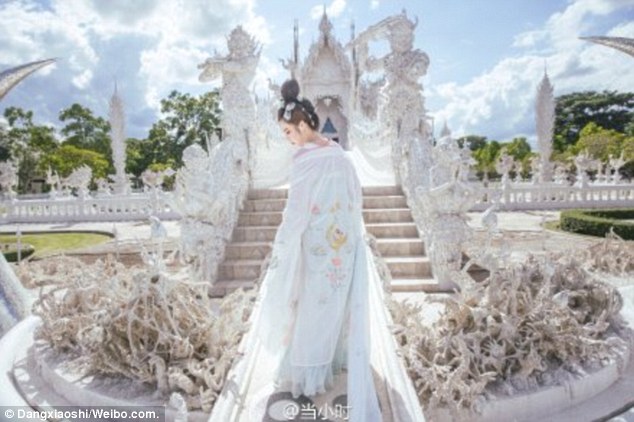 The photos were taken as part of a â€œtraveling in traditional Han costumeâ€ photography project.

According to Dang Xiaoshi’s Weibo account, the project aims to promote China’s traditional Han costumes, which the model wears in the photos.

The project had traveled to other Asian countries, including Japan and Nepal, before heading to Thailand.

Mr Kositpipat told the press conference that the production team contacted the temple for permission before filming. He accepted their candidacy by telephone.

“I specifically asked them not to pose in a provocative manner or wear revealing clothing.”

The temple owner also said at the press conference, â€œI want Thais to understand that when the photos are great it brings great reputation to the country.

“There shouldn’t be anything that could offend our religion.” 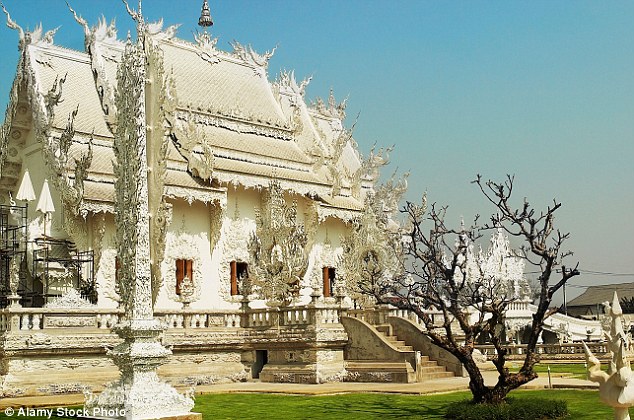 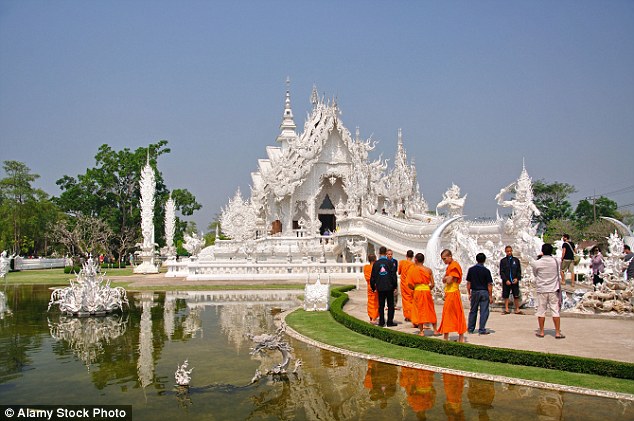 The artistic temple attracts many tourists each year, including Buddhist monks (above in orange) and devotees

Internet users are divided on the subject.

While some still recognize the beauty of the photos, others disapprove of the model for having posed in front of the sacred establishment.

One Weibo user said, “You have to take your shoes off to show respect in a place with such a strong religious background, lying on your side is of course not respectful.”

Another internet user seems to defend the model: “I really like this series of photos, the news said that one of the photos is disrespectful, I would say that it is better than those who have urinated everywhere or those who throw garbage. “

Wat Rong Khun is a popular tourist spot for Chinese tourists visiting Thailand due to its great architecture and free entry policy.

Earlier this year, the temple found itself at the center of an international dispute over it banning Chinese tourists from using its new toilet.

The owner had to apologize to the Chinese public in March.