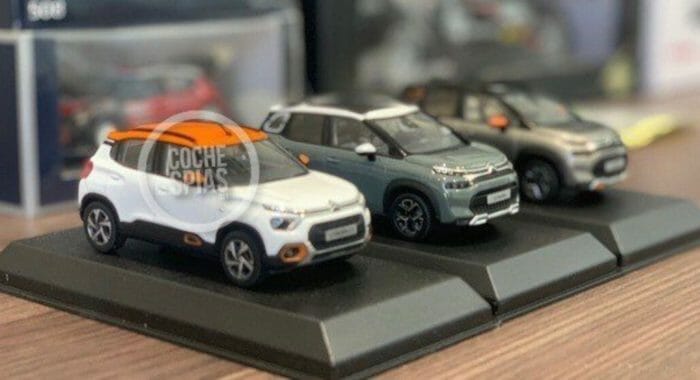 CitroÃ«n marked its foray into the Indian market with its premium C5 Aircross SUV. The C5 Aircross was a revelation and it certainly made us a little greedy. The popular French automaker has already flexed its capabilities and now it is eager to expand its portfolio in India with the launch of C3. As the name suggests, the C3 or the C3 Aircross will be placed under the C5 Aircross. It was previously spied on during tests on Indian roads and now its design has been leaked online thanks to its promotional scale model.

The C5 Aircross managed to impress the Indian junta with its quirky but funky look. Through the reduced model, the C3 will take the same path.

The C3 is a high-driving compact SUV based on the PSA Group’s Common Modular Platform (CMP) and, yes, completely different from the one behind the C5 Aircross SUV. The typical CitroÃ«n design cues cannot be missed that will make the C3 stand out from the rest of the cars in its segment. The C3 will boast a typical CitroÃ«n wide grille up front which will be flanked by dual-layered headlights to make it crisper and somewhat similar to the existing C5 SUV. The rounded shapes of the hood are a common detail with the European C3, as is the styling of the grille. The side profile of the next SUV features wheel arches shod with alloy rims. Also, it uses a contrasting orange roof, as well as a few other orange highlights here and there, giving it a very sporty appeal.

CitroÃ«n’s next subcompact SUV is expected to feature a single 1.2-liter turbocharged petrol engine. It’s likely to produce around 130bhp, and the engine will likely be offered with manual and automatic transmission options as well. He will be placed in the under four-meter range and will face the Kia Sonet, Hyundai Venue and Maruti Vitara Brezza. It is reported that the subcompact SUV, developed locally by CitroÃ«n, will be launched in the second half of 2021. The new model is expected to arrive during the holiday season this year.

The model poses for the Insta photo in business class, is exhibited by passengers