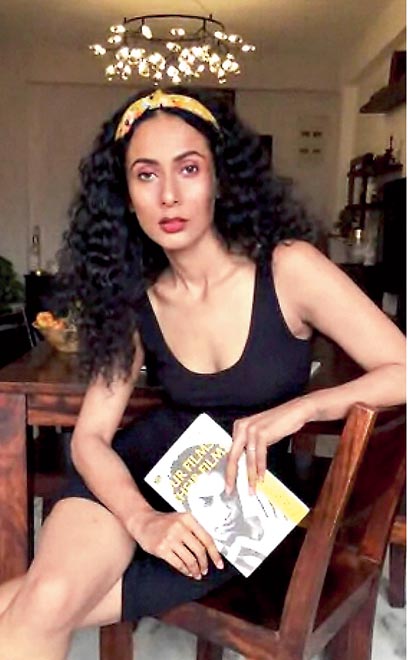 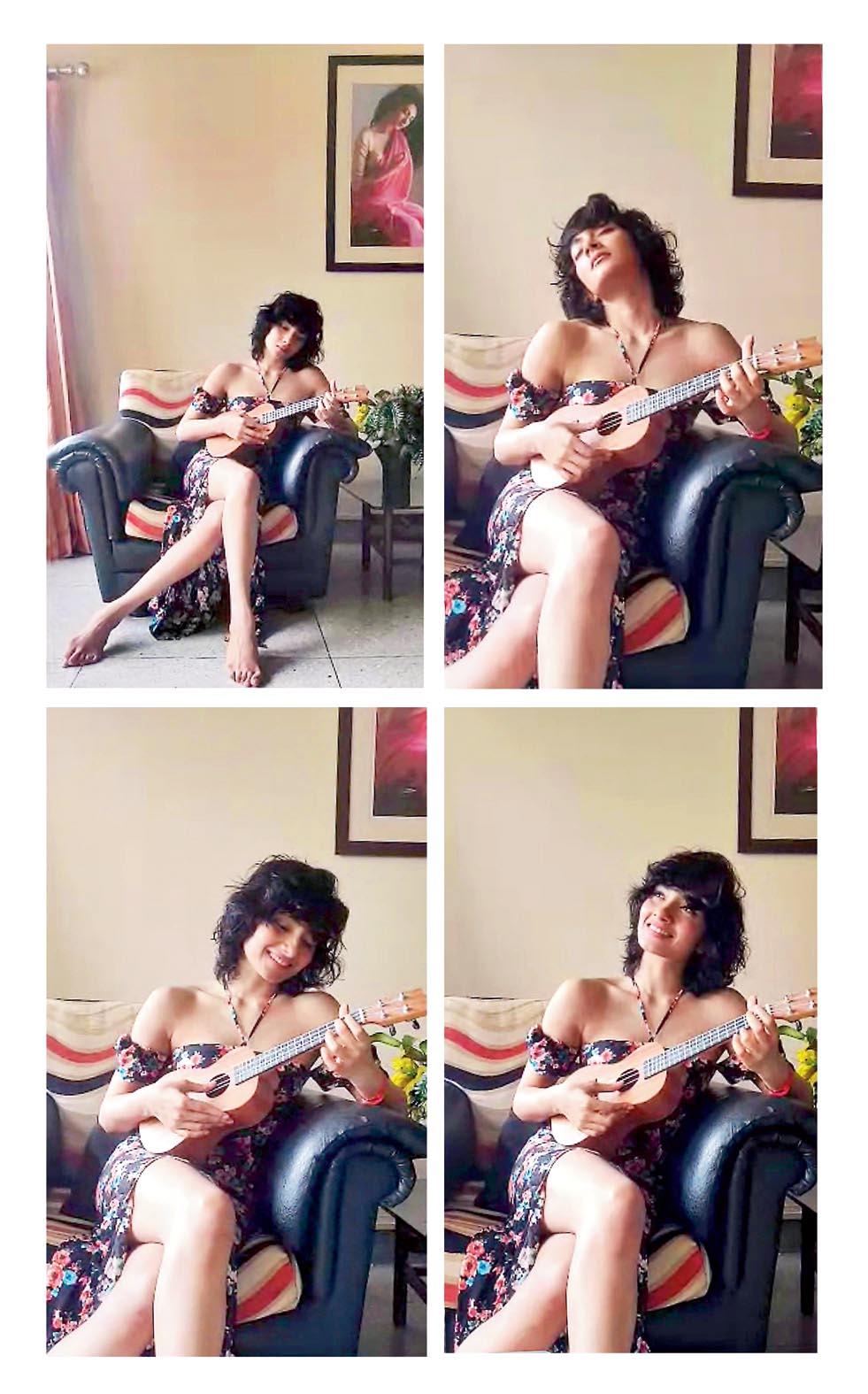 They have a cumulative modeling experience of more than three decades between them. Neeraj Surana, Ushoshi Sengupta, Sneha Ghosh and Diti Saha. The quartet of Calcutta’s most recognized glam faces … on the ramp and beyond. Call time, hairstyle and makeup, location, camera, walk, pose, change, wait … breathing … recovery … they thrive on the hustle and bustle of a fashion shoot. They feel at home away from home with families away from families. A cocoon of comrades who team up. As the silence of the lockdown descended on all of us, their normal also saw a sudden stop. The lights dimmed. The buzz is gone. The chatter was drowned in uncertainty … “pull” becoming “remembering things from the past”. The show, however, must go on. “Yes”, they answered in chorus! How? ‘Or’ What? The global platform of the virtual world that unites all of humanity. We picked Google Duo, the video calling app, and photographer Pabitra Das put on his thinking cap to execute the shoot in his crisp style. Our models decided on looks to showcase a slice of their confinement life, a never-before-seen experience in their career, they told us later. As a journalist who has taken part in billions of shoots, I don’t think I’ve ever waited for footage with such impatience. We then caught up with Neeraj, Ushoshi, Sneha and Diti for their comments. The unanimous hurray? Bring the new normal!

What was your first reaction to a containment shoot?

I was like the photographer is sitting at his place and I am at home … how will it work ?! I was trying to figure out if I was backdated or if the technology had moved too fast. But then he explained how it was going to be done.

Did it take you a while to adjust to the pose?

When we shoot, each model has a habit of posing and then checking every two shots and redoing it if it didn’t go well. Initially, what happened was that Jessica (Gomes Surana; wife) was holding the phone and she was following the photographer’s instructions on how to move and in what angle to move and stand. Every time I heard: ‘Thik achhe, hoye gechhe’, out of habit I would go on the phone and say: ‘Let me see!’ (Laughs) It was fun! Very different but fun.

What were the challenges of this shoot?

It wasn’t much of a challenge for me, but Jessica, because she had to adjust how to move, where to move … Finally, she understood. Otherwise it was quite simple. The shots were taken in the blink of an eye.

What was the best part?

I guess staying home, no makeup … nothing! Be yourself!

How did you experience the confinement?

My mental state before confinement was, I couldn’t spend too much time with the kids. After my operation in December 2018, my training was very erratic for the first time in my life.

During confinement, I can spend a lot more time with my children. In terms of training, I think I was doing too much in the initial phase of confinement … morning and evening. Sometimes I would throw an afternoon session. Now I do one session in the morning and a light session in the evening. 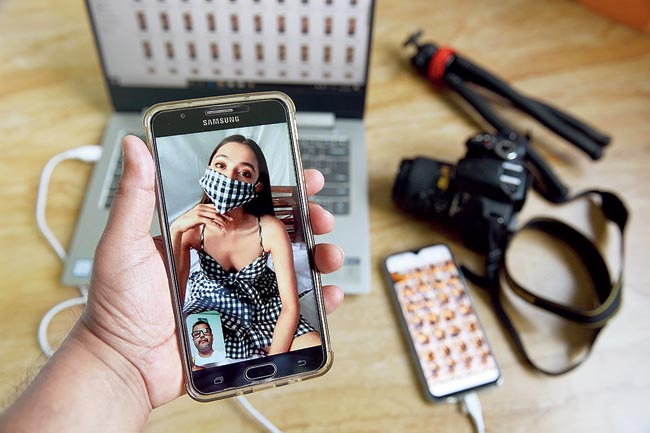 How was the shoot today?

It was really different. I’ve never done anything like this before. Photographers have asked me to do this, but I have never looked at this clickable image through multiple cameras in a positive way. I think sometimes you can do without clicking on the pictures and just enjoy your surroundings. I just didn’t feel the need to click while in containment. When, however, it comes down to doing something for a team that you have been familiar with for all these years, then that seems to be right on your doorstep. And, there’s more to that than just clicking on pretty pictures. It’s about enlightening people on how we handle containment. So, I felt more organic about this shoot.

What were the challenges?

I think during the photoshoot satisfying the photographer was what was going through my mind. I felt he was at a greater disadvantage than I, the subject. He was responsible for getting the mix right. So, I was trying to do my best to make her feel like these are normal circumstances, which of course was not. I had my mom controlling the phone and thank goodness she was there.

The fact of having seen a familiar face (the photographer)! (Laughs) It kind of got me into what my life was like. I feel like a role model again, which I haven’t had for a very long time. My mom is not going to make me feel like one. If a friend clicks on me, I won’t feel like a model either. This time I felt a different energy … strange but familiar.

What’s your plan to take over the world after lockdown?

I think we’re all working hard to normalize the lockdown. My basics are sorted and I’m watching life to surprise myself every day now. You should learn to live now.

Pabitra Das mastered the virtual lens for the shoot. He recounted his experience

What went through your mind when you heard about a containment shoot?

I was very excited to do a virtual shoot because I planned one. I had already taken pictures with the self-timer and I thought to myself: “Do I have enough frames in the house?” I had to find new ones and plan.

How did you do it?

I did the ‘production’ work for the very first time and I love to use that word … it’s a really cool thing … in terms of how much I was involved in the creative process. You feel much more responsible for the success and outcome of a shoot. It’s not just my body and my face. It’s also about my organizational skills … how to frame … how much light would pour in … I tested the executives and knew when the sunlight would come in.

It took me a day to figure out the frames. You have five people working with you on a shoot. Here I did everything. I’m not good at makeup and hairstyling and I am privileged to have the best makeup artists as good friends, who have always helped me. I knew the makeup was still manageable since I wouldn’t overdo it; doing a different hairstyle with each look was a challenge.

How long did you face a photographer?

March 20 was my last professional photoshoot. After that, I think it’s my first time facing a professional camera.

How different has it been?

The photographer could only say to me: “Left e ektu beshi ghor or right e”. He can only see the frame I showed him. So your homework had to be spot on. It automatically gives you creative depth and highlights a lot of your other skills. I didn’t know I could do this in three hours.

If virtual shoots become the new normal, where the crew is downsized, they should be fairly compensated. It’s very laborious … almost x100.

What did you think a containment shoot would look like?

I was very excited! It would actually go down in the history of the shoots we did for The Telegraph. I called Mainak (Das; makeup pro), to figure out what kind of makeup I could do. Ankita (Banerjee; stylist) was also on call. I know these images would be remembered for a long time. This shoot will always be special. It was surreal not to have the photographer on set but to hear the familiar words.

What was the hardest part?

One of the most important things is that in a shoot it’s the effort of the whole team. And there’s a reason these are all professional jobs. It’s at times like these that we understand the importance and value of having a team around. I think I was a good model, but styling or hair and makeup was not my strong suit.

And the most exciting part?

When I got up, washed my face and put on makeup, I was like, ‘Wow … I’m going to turn!’ It made me feel so alive. Being in front of the camera is my space.